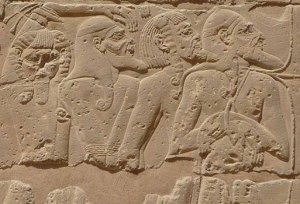 The Sea Peoples; still the Grand Mystery of the Ancient World after decades of study by historians from all disciplines. Theories vary, from citizens of Atlantis to Eurasian riders who took to boats, passing through localized rebels groups. Only one thing is certain: the Bronze Age passed with them, and a new Iron Age begun.

After their defeat by Ramesses III the Sea Peoples vanish from history. No records indicate where they came from and there are no accounts of them after 1178 BCE but, for almost one hundred years, they were the most feared sea raiders in the Mediterranean region and a constant challenge to the might and prosperity of Egypt.

Check out this article by the Ancient History Encyclopedia.

Thinking in the Past